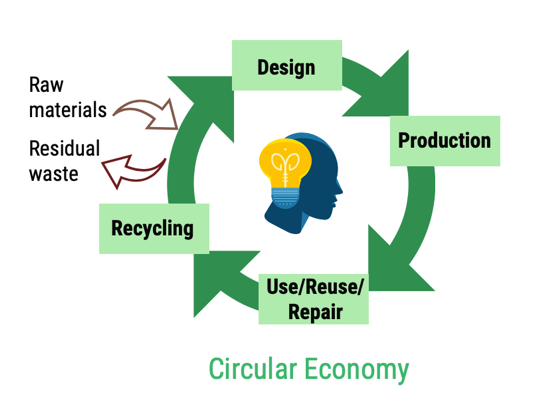 There is no denying that the model of economy developed during the industrial revolution —so called ‘linear’— based on finite resources as a beginning and waste generation as an end, leads ultimately to (what used to be unforeseen-) shortages of resources, environmental pollution and other alarming consequences on a global scale, notably on the climate and the biodiversity. This unfortunate ascertainment has urged scientists to rethink the way consumers goods are produced. Therefore, in the past few decades, we have witnessed the emergence of manufacturing processes implementing closed-loop approaches coming closer to a circular business model.1

One of the first examples that will come to your mind when mentioning circular economy is likely the recycling/eco-designing of plastics and packaging developed as awareness of the ocean plastic crisis increased, thus driving policy makers and industrials to seek solutions.2 But it doesn’t stop there! While (let’s be honest) we are still far from a revolutionary transformation of our economy, an increasing number of organizations around the world are adopting the concept of circular economy. In fact, developing a process with what can be perceived as constraints surprisingly drives innovation and creativity!

The founders of the London startup Aeropowder did not lack creativity when developing a process that turns the feathers generated by the poultry industry, considered as wastes, into valuable insulation textile.3 CelluComp followed a similar path by successfully recovering and reusing the waste streams of root vegetables to create microfibrillated cellulose, a material that can be used for instance as a reinforcing agent in cement and that has the potential to reduce the carbon dioxide emission of the cement industry.4 Note that these companies are not outsiders; keep an eye out for the business initiatives using sustainability as their foundation, each more creative than the others.

Anne is a Technology Scout at TechScout